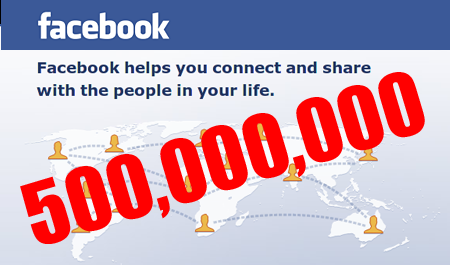 Are you an active Facebook user? If so, then you’re a part of Internet history and helped Facebook achieve a gigantic milestone – reaching 500 million users. With half a billion users, Facebook now has a population that’s almost as big as North America’s. If Facebook was a country of its own, it would be the 3rd most populous nation in the entire world putting it behind India and China which both have a population of over 1 billion. Pretty amazing huh? What makes it more amazing is that the number – 500 million, is the number of active users, people who have logged on to Facebook within the last 30 days.

As of this morning, 500 million people all around the world are actively using Facebook to stay connected with their friends and the people around them.

This is an important milestone for all of you who have helped spread Facebook around the world. Now a lot more people have the opportunity to stay connected with the people they care about.

To celebrate this achievement, Facebook has also launched a new application called Facebook Stories – a collection of user-submitted stories about Facebook’s impact on people’s lives. These stories will be categorized by themes and locations around the world. You can submit and share your own story and read hundreds of others on Facebook Stories.

Thus far, 2010 has been a rollercoaster ride for Facebook. Earlier this year, they had some issues with their privacy controls and how they shared user information with third parties. Then there’s the Facebook Like button that spread the Internet like wildfire. How about the upcoming movie entitled The Social Network which is based on the story of Facebook? There’s also the ownership lawsuit and the recent survey putting Facebook among the worst in customer satisfaction.

In spite of its shortcomings, I still like Facebook because it lets me connect with my family, friends, and even long lost relatives or relatives whom I’ve never met before. It also allows me to reach out to other people, share inspiring messages and Bible texts, share information, and promote my blog JaypeeOnline which would’ve been difficult or impossible to do without this social network. Although it can be counter-productive at times, Facebook does provide us with entertainment with the games and stuff that our friends post. As with everything, we have to use Facebook in moderation. Right?