Zurker – Social Network You Can Own

About two weeks ago, my friend Nick Oba invited me to check out his new startup, a social networking site called Zurker. It works like any regular social network where users can post status updates and wall posts, notes, share web links and photos, connect with other users who share the same interests, etc.

What makes Zurker different and unique from existing social networks like Facebook, Twitter or MySpace is that it is a member-owned application. It is not funded by VCs (Venture Capital) but funded by members who invest and buy vShares (virtual shares), making them co-owners of the application. Another way to earn vShares is by referring friends and other people to join Zurker.

The vShares that members invest in aren’t real stock but are considered as an agreement between the co-founding developers and users regarding the size of their equity in the venture that will be established. Once a 1,000,000 vShares has been allocated, Zurker will be revamped as a public corporation and only then will the vShares turn into real shares.

I’ve been trying out Zurker the past few days and the first thing that sticks out is the user interface. It is simple and different from what most of us are used to with other social networks. I don’t mind the simplicity but the interface right now is a bit clattered and awkward to use, especially the menu navigation where it can be quite confusing to navigate from one area to another or find a specific page (Settings). I believe that Zurker should improve the user interface if they want to attract more users. Btw, I’m not sure if it’s just me but the color scheme reminds me of MyBlogLog. 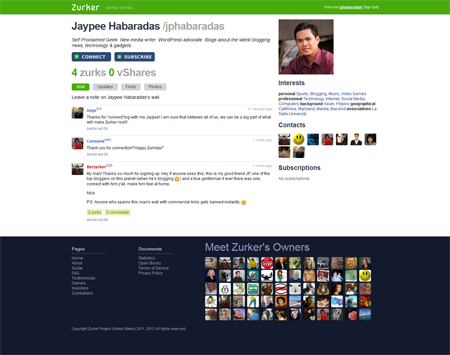 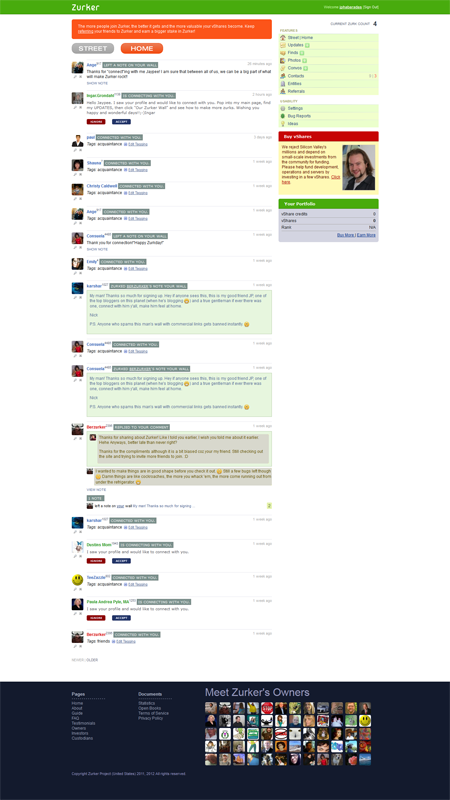 Zurker is still in its initial stages so we can’t expect it to have everything. I’m not sure if users would like to have Apps and Games on Zurker but here are some features that I’d like to see added in the future – First, Zurker’s own web button, probably call it the Zurk button which works something like the retweet and like buttons where users can “zurk” web content and share it on Zurker; Second, a mobile app version for iOS, Android and Windows Phone.

As of now, Zurker is still in beta testing so it is not yet open to the public. If you want access, you’ll need an invite. Don’t worry I have a >Zurker invite just for you.

Anyone else who’s on Zurker? What do you like/dislike about this new social network? What features/options would you like to be improved or added to Zurker? Please share your thoughts.