Early this year, Yahoo! launched a new product/service in Portueguese called Meme which according to rumors was a clone of Twitter. But according to the people who gained first access to Yahoo! Meme, it doesn’t even come cloes to Twitter and some even call it a “mediocre” or a poor man’s version of Tumblr.

Right now, it is already available in English but it is still in closed private alpha testing so the only way you can get it is through an invite. A few days ago I received an invite from a Yahoo! Community Manager and even though I wasn’t that much interested, I went ahead and gave it a try.

First thing you need is an invite. When you receive an invite, just click on the link provided to redeem your invitation. Next thing to do is to create an account by using an existing Yahoo! profile or create a new Yahoo! account. After that, you’re now ready to start using Meme. You start with a blank or empty page and start uploading stuff like photos, videos, text and music. Right now, Yahoo! Meme only supports videos from YouTube and Vimeo. For photos, you can upload files from your computer or provide an image link from the web. And for music, you can only upload files from the web. 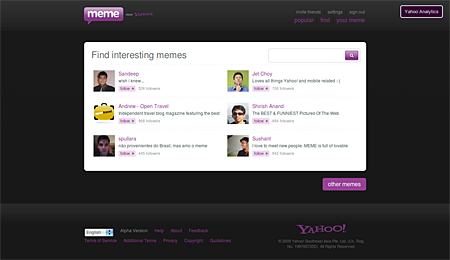 If you don’t have anything to upload or post, you can search for popular memes or find interesting memes using keywords and repost them. You can also “follow” your friends who have Meme accounts or other interesting memes.

Customize your meme with themes 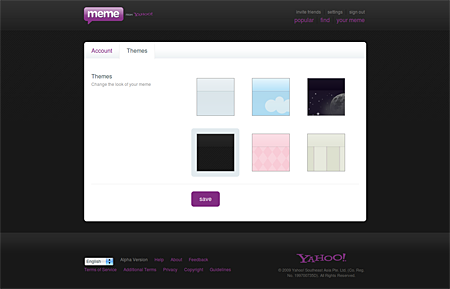 Earlier I said that Yahoo! Meme was a poor man’s version of Tumblr basically because it doesn’t have much customization options and right now the only things you can configure/customize are your meme title, description, avatar and meme theme.

It’s still uncertain whether Yahoo! Meme will be receiving upgrades or new features but right now, it’s just a no-frills micro-blogging/micro-sharing service that’s simple and straightforward. If you’re looking for something that gives you more customization options, then you’re better off with Tumblr.

I have 15 invites to give out so if you’re interested, leave a comment below using a valid email address and I’ll send an invite your way. If you’re already on Yahoo! Meme, you can check out my meme and follow me.

What do you guys think of Yahoo!’s new sevice – Meme? What do you like/dislike about it? If you had the choice, what features would like to add or see on Meme?