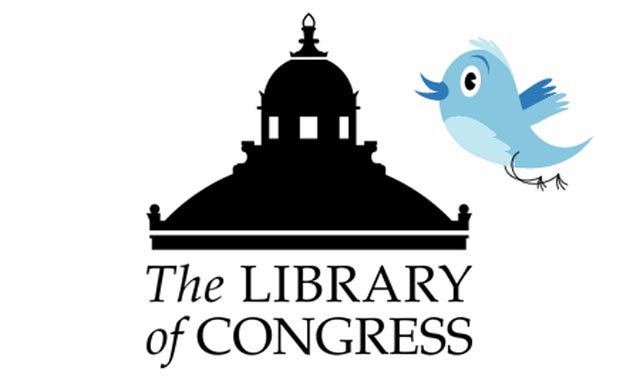 Even if you’re not a celebrity or someone who has a lot of followers on Twitter, as long as you have a Twitter account and have sent out “tweets” then you can congratulate yourself because your tweet or tweets are now archived in the Library of Congress – the largest library in the world by shelf space and holds the largest number of books. 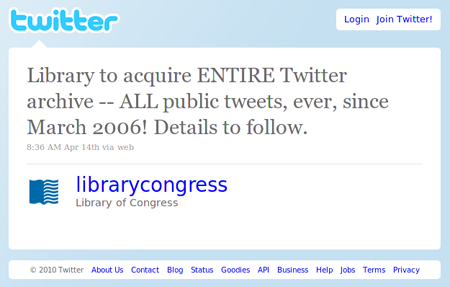 A few hours later, they sent out another tweet but this time providing a link to their official blog post regarding the acquisition of the entire Twitter archive. 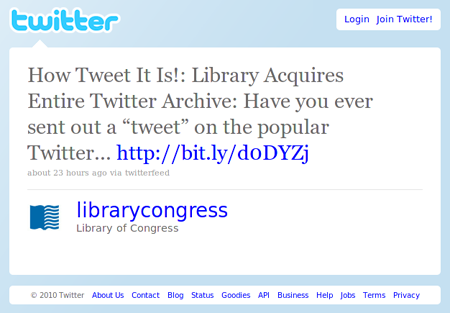 Have you ever sent out a “tweet” on the popular Twitter social media service? Congratulations: Your 140 characters or less will now be housed in the Library of Congress.

That’s right. Every public tweet, ever, since Twitter’s inception in March 2006, will be archived digitally at the Library of Congress. That’s a LOT of tweets, by the way: Twitter processes more than 50 million tweets every day, with the total numbering in the billions.

We will also be putting out a press release later with even more details and quotes. Expect to see an emphasis on the scholarly and research implications of the acquisition. I’m no Ph.D., but it boggles my mind to think what we might be able to learn about ourselves and the world around us from this wealth of data. And I’m certain we’ll learn things that none of us now can even possibly conceive.

Twitter is expected to make its own announcement on its blog later today from “Chirp“, the official Twitter Developer Conference held in San Francisco, California. 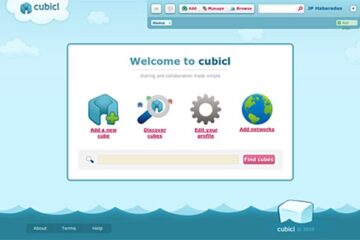