The guys over at Engadget has a video of how their Apple iPhone was able to use a T-Mobile SIM to connect to the T-Mobile network and make a phone call. This was made possible by a small piece of software created by the iPhoneSimFree team who have been working on this since the iPhone was released.

The process of cracking Apple iPhone’s SIM lock system only took a couple of minutes. I’m sure a lot of people are interested to know where they can purchase this software. Too good to be true? Well the guys at Engadget can confirm that this method works.

we can confirm with 100% certainty that iPhoneSIMfree.com’s software solution completely SIM unlocks the iPhone, is restore-resistant, and should make the iPhone fully functional for users outside of the US

Here’s a screenshot of the iPhone that was unlocked: 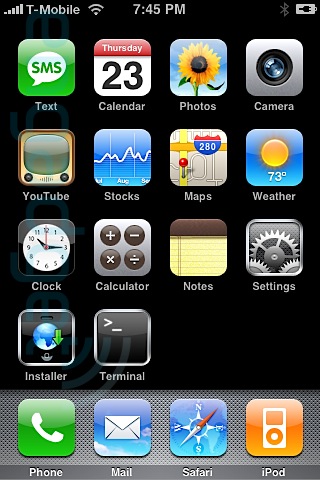 I’ve seen several videos on YouTube about unlocked iPhones but they seem to be hoaxes. So you guys who own an iPhone outside the US, you no longer have a very expensive iPod but a fully functional iPhone. Btw, this method of unlocking for now, is restore and upgrade resistant so even if you restore or upgrade the firmware, the device would still be able to function with a different network’s SIM.

I’m sure AT&T knew this was gonna happen sooner or later but not as soon as this. The question now is what will AT&T do about it? Is it even legal to unlock a cellphone in the US? Would you buy an iPhone now that you know it can be unlocked? Share your ideas and opinions.

What do you guys think of this new software that unlocks the Apple iPhone? For those of you who own an Apple iPhone, would you be interested to try this software to unlock your device? Please share your thoughts by leaving a comment below.