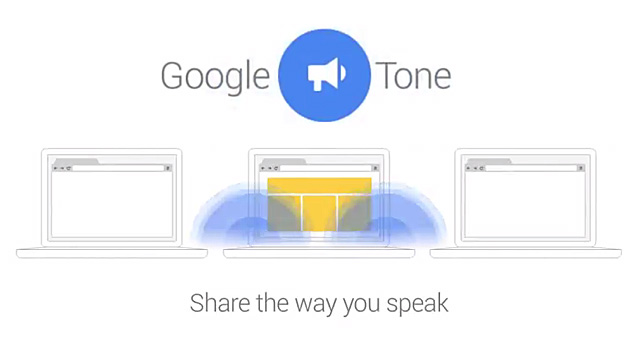 A lot of the things that are developed and become official Google products or services start from Research. Many of the things that they do in that department are stuff that hasn’t been done before and one of their latest experiments is a way to send web URLs with only the use of sound. Very interesting isn’t it?

This experimental project is called Google Tone and it comes in the form of an extension for the Google Chrome web browser. With Tone, you don’t need to copy and paste URLs before you can share it. Just install the Chrome extension and share away!

So how exactly does Google Tone work? It broadcasts and shares the URL of the current tab to any device that is within earshot (provided that the receiving device also has the same extension installed). It came about with the idea of having an easy and simple way to share digital things with people nearby the same way as talking to them, so it’s like computers talking to each other.

For a more detailed and technical explanation about Google Tone, check out this excerpt from the official blog post from Research at Google:

Tone provides an easy-to-understand broadcast mechanism that behaves like the human voice–it doesn’t pass through walls like radio or require pairing or addressing. The initial prototype used an efficient audio transmission scheme that sounded terrible, so we played it beyond the range of human hearing. However, because many laptop microphones and nearly all video conferencing systems are optimized for voice, it improved reliability considerably to also include a minimal DTMF-based audible codec. The combination is reliable for short distances in the majority of audio environments even at low volumes, and it even works over Hangouts.

Because it’s audio-based, Tone behaves like speech in interesting ways. The orientation of laptops relative to each other, the acoustic characteristics of space, the particular speaker volume and mic sensitivity, and even where you’re standing will all affect Tone’s reliability. Not every nearby machine will always receive every broadcast, just like not everyone will always hear every word someone says. But resending is painless and debugging generally just requires raising the volume. Many groups at Google have found that the tradeoffs between ease and reliability worthwhile–it is our hope that small teams, students in classrooms, and families with multiple computers will too.

As mentioned above, Google Tone would be a very useful collaboration tool that can be used by small teams, classrooms, and families with multiple computers. Right now, it can only share web URLs but who knows it might be able to share other stuff as well and when that happens, this can be useful for even more purposes. One thing to take note of, you and the people you’re sharing stuff with via Google Tone should be signed in to their Google accounts. It may also not work in areas with loud noises, over certain distances, on poor Internet connections, or on computers that don’t have a microphone.

Btw in terms of security, since Google Tone broadcasts are public by design so it sends out audible tones that can be heard or intercepted by other devices that have the extension installed, so it’s best not to use them to exchange confidential information ad it’s recommended that you don’t use it in public places like the airport, library, coffee shop, etc. If you don’t want to accidentally share or receive stuff via Tone, you can disable it by right-clicking on the Tone icon and selecting Disable Tone.

If you want to try it out, just download and install the Chrome extension, fire up the Chrome web browser, open a tab and type in the desired URL and press the Tone button. Btw, you need to make sure that your computer’s volume is on so that it can broadcast the sound to other devices.

Anyone else tried Google Tone? What other things would you like to be able to send with this kind of technology?