Mozilla Firefox is a very good and stable browser and I love it because of the many available extensions/addons/plugins that provide lots of extended features. However, Mozilla Firefox when used (with a lot of extensions installed) on Windows Operating System, tend to slow down and tend to crash more often. I think its because Ubuntu like other Linux flavors get a Firefox version that’s optimized for the system. If you’re a Mozilla Firefox user who’s looking for a custom-built Firefox browser that would perform 25% better and faster on Windows Operating System, then you should try out Pale Moon.

The Pale Moon project is a custom-built, optimized Firefox browser designed specifically for the Windows Operating System. Although it is built on Firefox, it doesn’t have all the features or functions that Firefox has because some features have been disabled to maximize the speed and efficiency of Pale Moon.

I’ve tried Pale Moon for about a week now and I can say that it really is faster and performs better than a regular Mozilla Firefox build on a Windows Operating System. I’ve compared the boot time for each version and Pale Moon definitely boots up faster than Firefox. One particular test that I did was to load up several flash intensive websites like NBA.com, CNN.com, YouTube and Hulu on both Firefox and Pale Moon, and then checked the memory usage for each browser. As you can see from the screenshots below, Pale Moon uses less resources than Firefox. 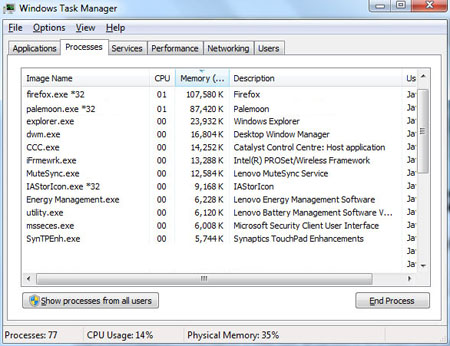 Another important thing to mention is that almost all Firefox extensions/addons/plugins can be installed and will work on Pale Moon. I installed the exact extensions/addons/plugins that I have on Firefox and everything worked fine. I also noticed that the whole time I was using Pale Moon, the browser has never crashed. I tried and tested it by doing the same stuff I do on Firefox – logging in to my WordPress dashboard, web browsing, watching online videos, etc.

Pale Moon is an open source project so it is FREE to download/use. If you want to be updated with the latest Pale Moon developments and news, you can follow it on Twitter – @palemoonbrowser.

IMPORTANT: Some users who tried it report that uninstalling Pale Moon can delete your existing Mozilla Firefox profile (stored bookmarks, passwords, sessions, etc.). To make sure you won’t lose your profile you can back it up by installing either the FEBE (Firefox Environment Backup Extension) or the MozBackup Firefox addon.

UPDATE: As pointed out by one of our readers, only older versions of Pale Moon caused issues with the Mozilla Firefox profile as Pale Moon 3.6.6 and later versions no longer share profiles with Firefox. If you’re running a version earlier than 3.6.6, you can use the Profile Migration Tool to migrate your profile.

Anyone else tried or are using the Pale Moon web browser? From your experience, is it faster and does it perform better than Firefox? Please share your thoughts.