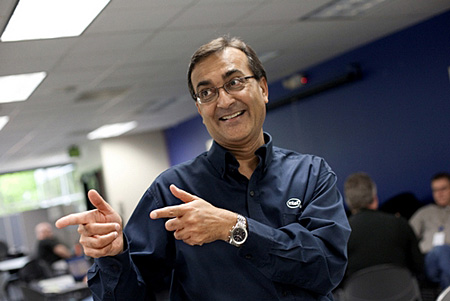 One of my favorite TV commercials is Intel’s “” commercial featuring Ajay Bhatt, one of the co-inventors of the USB (Universal Serial Bus). In this commercial, it shows Mr. Bhatt (played by an actor) walking around the office with his co-workers all star-struck by his presence, signing for autographs and getting the attention that rockstars usually get from their fans.

Conan O’brien, host of The Tonight’s Show recently sat down and interviewed the real Ajay Bhatt. For the benefit of those who haven’t seen the commercial, I’ve posted the Intel “Our rock stars aren’t like your rock stars” commercial followed by Conan’s video interview with Ajay below.

I really like the commercial. I think its very funny and very clever. I’m also a fan of Conan O’Brien so I also enjoyed watching that funny and ridiculous interview. “I co-invented the USB port and the drinks are on moi!” LMAO

What do you guys think of Conan O’Brien’s interview of Ajay Bhatt and spoof of Intel’s “Our rock stars aren’t like your rock stars” TV commercial? Please share your thoughts by leaving a comment below.