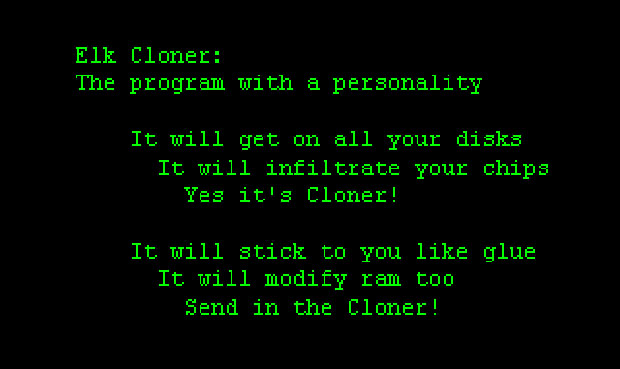 Well, did you know that the first ever computer virus created was created for an Apple system. Yup, you read that right. The virus was called the “Elk Cloner“.

Elk Cloner is the first known computer virus that has spread “in the wild,” i.e., outside the computer system or lab in which it was written. It was written around 1982 by a 15-year-old high school student named Rich Skrenta for Apple II systems.

Elk Cloner: The program with a personality

It will get on all your disks
It will infiltrate your chips
Yes it’s Cloner!

It will stick to you like glue
It will modify RAM too
Send in the Cloner!

Annoyance, in fact, was the reason for the virus’s existence. Skrenta previously had the habit of giving out pirated computer games to his friends, but games modified such that they would stop working after a given number of games. This scheme guaranteed a high level of annoyance: by the time those friends grew to like the programs the programs would stop working, usually with some “humorous” message (at least as judged by their author). After a while those friends learned never to allow Skrenta near their disks. Then came Cloner, which could annoy friends without Skrenta physically gaining access to their disks.

According to contemporary reports, the virus was rather contagious, successfully infecting the floppies of most people Skrenta knew (including his math teacher), upsetting many of them (including said math teacher). Part of the “success,” of course, was that people were not at all wary of the potential problem (virus infection could have been avoided by not inserting floppies into computers without hard-booting them before), nor were virus scanners or cleaners available. The virus could still be removed, but it required an elaborate manual effort.

So put out the cake and start singing “Happy Birthday Computer Virus”! Hehe..
Anyways, now is a good time to remind everyone to practice safe computing and keep your antivirus up-to-date!

Hat tip to my friend Donjun.