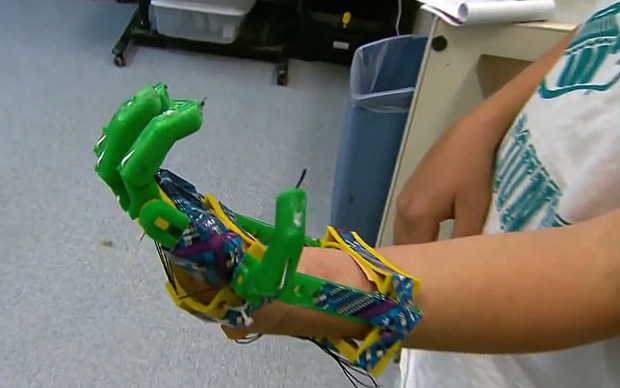 Is technology making our lives easier or just adding more stress to it? I think it can be both a blessing or a curse. However, for 12-year old Leon McCarthy, technology is definitely a blessing because it has made his life better and even more awesome.

While Leon was still inside his mother’s womb, restricted blood flow prevented his left hand from fully developing and caused him to have no fingers on that hand. Commercial prosthetics cost several thousands of dollars so his father, Paul McCarthy went out on to search for an inexpensive yet functional alternative. He came across a YouTube video posted by inventor Ian Owen which provided detailed instructions on how to create a prosthetic hand using only a 3D printer.

Paul McCarthy got the instructions online for the Snap-Together Robohand, printed out the materials using Makerbot, and assembled it. His son Leon can now use his left hand to do things such as grab his backpack, hold a pencil or bottle, and other stuff that wasn’t possible before he had the 3D printed prosthetic hand. Check out the video below:

The 3D-printed hand called “Robohand” is a collaboration between Ivan Owen of Washington State and Richard Van As of South Africa. Their aim is to create an affordable and functional prosthesis option for people who can’t afford regular prosthetics. I really admire these guys because they’ve released the instructions online and made it available to the public for FREE when they could’ve easily made money from it.

Unlike the 3D-printed gun which made a lot of people worried, I’m sure this new innovation will help a lot of people with disabilities as well as their families because they now have an affordable and functional option. What makes the Snap-Together Robohand even more awesome is that the materials are very cheap but durable so even if the person using it outgrows their Robohand, they can just go and make a new set.

For additional information and instructions for the Snap-Together Robohand, check out this link. If you’d like to know more about the 3D-printed prosthetic hand project, check out the official Robohand official Facebook page.