Geolocation is one of the hottest if not the hottest trend in social media these days and a very hot topic during the recent 2010 SXSW festival. I’m pretty sure most of you are already familiar with it and most likely are actively using location-based social networking apps like Gowalla or Foursquare on your mobile devices. Twitter launched the geolocation feature on their website two months ago, enabling users to include their current location with their messages. So now, you can show others where you’re tweeting from.

Although I’m on Gowalla and Foursquare, I haven’t enabled and I don’t use the geolocation feature on Twitter. For those of you who have, I’m positive that you’ll be interested with this web-based Twitter client that I’m featuring today. Its called Streamd.in, a simple web-based Twitter client that’s paired with Google Maps that lets you see what’s happening around you, let others know what you’re doing or broadcast your thoughts and location via live video.

Streamd.in is a project headed by Derek Punsalan working together with Raul Raja, Justin Elsberry, Nick Elsberry and Edward Suh. The original plan for Streamd.in was to display Twitter updates from around the world on a Google Map but it eventually became a web-based Twitter client paired with Google Maps. 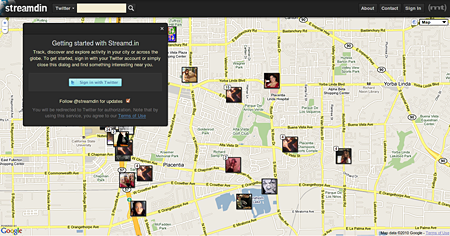 Being a Twitter client, you can do almost everything – post updates, view the timeline, mentions, direct messages, favorites and retweets on Streamd.in. Only thing you can’t do right now is access your lists. The live streaming video feature on Streamd.in is made possible by TokBox.

If you want to know more about it or want to try it out yourself, check out Streamd.in or you can also follow @streamdin on Twitter.