Was finally able to finalize the transaction to upgrade to Verizon FIOS and sign up for the Triple Play bundle (Internet, cable TV and telephone service) last week. The Verizon technician came over last Monday to install the new line and equipment (cable boxes, Internet modem & wireless router).

Signing up for the Verizon FIOS Triple Play bundle was the best and practical choice because it would allow us to save $60-80 per month compared to having the three services with different companies. We previously had DirectTV for cable, Vonage for phone service and the old Verizon Internet service. Anyways, I don’t watch TV that much these days so the only thing I was looking forward to was the Internet service being upgraded to 15Mbps which was the same speed I had back in California.

Below are the screenshots of the Internet speed tests I took via Speedtest.net:
Herndon, VA Server 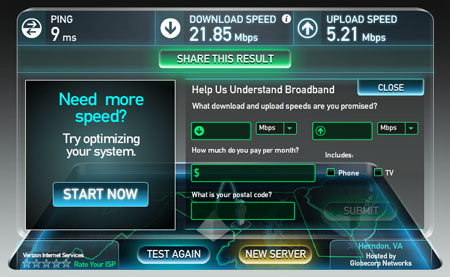 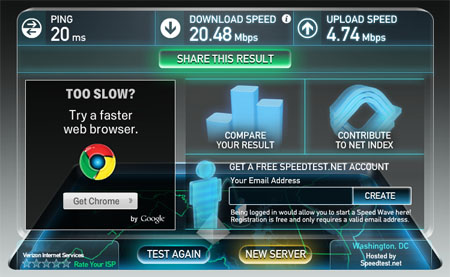 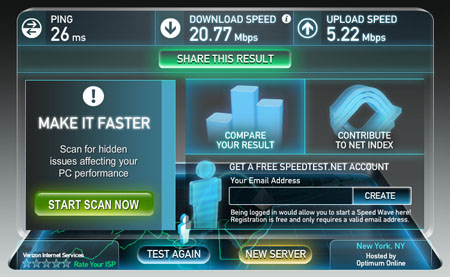 The Internet speed specified on the plan was 15Mbps but as you can see from the speed test, its even over 20Mbps. You’ll certainly see and feel the difference when you go from 1.5Mbps to 15Mbps. Web pages, videos and other stuff load quickly making work and Internet surfing so much better.

It’s only been a few days since it has been installed so its too early to know whether the Internet service is stable or not. The speed has been good, averaging at 20Mbps although there’s already an instance where Internet went down for about 30 minutes yesterday. I’m not sure if it was because of the weather or there was something wrong with the connection. Will have to observe the next few days/weeks to see if that happens again or not.

For those of you who are in the US, who’s your ISP (Internet Service Provider)? How much are you paying for your Internet service and how fast is the speed? Anybody else using Verizon FIOS?