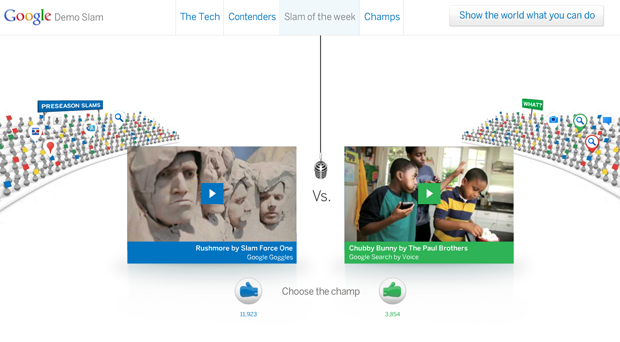 Ever heard about Google Demo Slam? Neither have I. I only knew or read about it today while browsing the Internet. Google Demo Slam is a demo competition (started October of this year), where Google users can submit and share their videos using Google products like Google Instant, Google Search by Voice, Google Translate, Google Video Chat, Google Goggles, Google Earth, etc. in creative and ingenious ways.

Why Demo Slam?
Technology Rocks! Especially when it’s available to the world and doesn’t cost a thing. But learning about it? That’s not so great.

What the world really needs is a few brave souls willing to tech demo like no one has dared demo before, so everyone can benefit from this stuff.

That’s Demo Slam. A stage where charisma, creativity, and maybe even a dash of courage can finally make demos gotta-show-your-friends awesome. Anyone can Slam. Even our CFO Patrick made one. Is it better than Engineering VP Udi’s Slam? Either way, we’re pretty sure you can do better than those guys ;-)

So choose your tech and get the people who would never watch a tech demo (ironically the people who need them most) to finally discover this coolness. Use your talents. Use your dog. Use whatever, as long as it pushes the limits of technology and encourages us all to use it in ways we’ve never imagined.

Google Demo Slam is not only for showcasing creative videos submitted by Google users. It’s also a way to promote and make boring tech demos more attractive or more interesting for people who are not into it and hopefully encourage them to use these technology (Google products).

Head on over to the Google Demo Slam website and vote for the user submitted videos that you like. New demo slams, called Preseason Slams will be featured each week and the winner for that week will be crowned Champ of the week.

Anyone seen the latest Google Demo Slam videos? Which one is your most favorite Demo Slam?