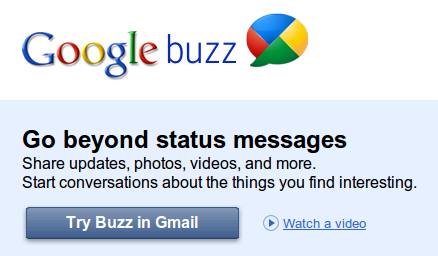 Determined not to be left behind in the social media revolution, Google officially launched today a new product called Google Buzz which confirms earlier rumors of a new social status feature being integrated into Gmail.

Google Buzz was presented to the media by Bradley Horowitz, Google’s vice president for product management. With the creation of Google Buzz – the integration of status updates and media-sharing technology into the Gmail interface, Google hopes that Gmail users would be spending more time on Google’s sites instead of going to other social media sharing sites like Twitter, Facebook or FriendFeed.

Today, we’re launching Google Buzz, a new way to start conversations about the things you find interesting and share updates, photos, videos and more. Buzz is built right into Gmail, so there’s nothing to set up – you’re automatically following the people you email and chat with the most.

Below is a video that explains how it works:

To start using Google Buzz, all you need to do is login to your Gmail account and you will be greeted with this page: 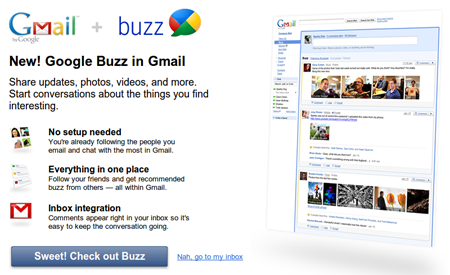 Just click on the “Sweet! Check out Buzz” button and you’ll be brought to the Google Buzz welcome page on your Gmail account. 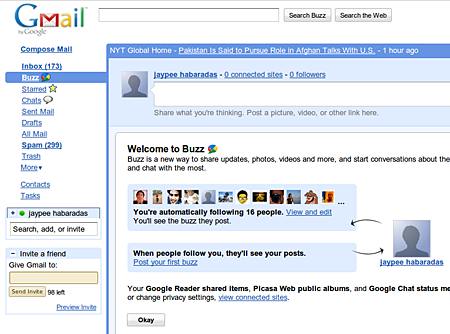 Users can access Google Buzz on their mobile device in three different ways: via Google Mobile’s website – http://m.google.com/, via http://buzz.google.com/ on the iPhone and Android and lastly, from Google Mobile Maps. I tried it on my iPhone and it works flawlessly. Users can also link their Twitter, Flickr, Picasa, and Google Reader accounts to their Buzz streams.

Although some people think and look at Google Buzz as a Twitter or Facebook competitor, I think that it is more like a FriendFeed-killer as the two services have so many similarities feature-wise. For those who aren’t familiar with FriendFeed, it is a social aggregation service that was acquired by Facebook last year. It is a very promising service that could’ve made it big but didn’t get enough exposure which Google Buzz won’t have a hard time doing with the large number of Gmail users and its seamless integration into the Gmail interface.

You can follow my Google Buzz profile at – http://www.google.com/profiles/jphabaradas

What do you guys think of this new project from Google? Would it be able to compete with Twitter and Facebook? Can it succeed where FriendFeed couldn’t? Please share your thoughts by leaving a comment below.

Microsoft Celebrates 25 Years In The Philippines

How 5G Has Changed Mobile Entertainment

Tips To Help You Get More Content Ideas for Your Blog

By  Guest Author
Do NOT follow this link or you will be banned from the site!
Share this ArticleLike this article? Email it to a friend!
Email sent!