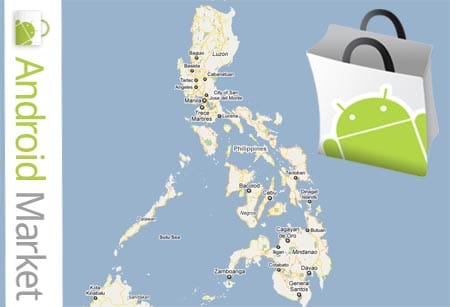 Got an email yesterday from Aileen Apollo, Google Philippines Country Consultant about some exciting news for Android users in the Philippines. Google announced yesterday, May 12th that they will be expanding Android paid apps support to 99 new countries, which includes the Philippines. I’m sure Filipino Android users are very happy with this development as this means they’ll have access to more applications like games, social apps, productivity apps, photography apps, media & video apps, news & magazines apps, music & audio apps, etc.

Here’s the official announcement from Google:

The number of countries where Android users can purchase priced apps will increase to 131 including the addition of the Philippines. Consumers from these newly supported countries will now have access to over 200,000 free and paid apps in Android Market, which they can access directly from their Android-powered device. Apps will be priced in US Dollars, and can be bought through Google Checkout, which supports local Mastercard and Visa credit cards.

Android Market was launched to help developers distribute mobile applications on a level playing field, while enabling users to find and download apps that leverage the unique capabilities of the Android platform. Google is pleased to announce the expansion of Android Market’s offerings in these additional countries to deliver more apps for more people.

About Google Inc.
Google’s innovative search technologies connect millions of people around the world with information every day. Founded in 1998 by Stanford Ph.D. students Larry Page and Sergey Brin, Google today is a top Web property in all major global markets. Google’s targeted advertising program provides businesses of all sizes with measurable results, while enhancing the overall Web experience for users. Google is headquartered in Silicon Valley with offices throughout the Americas, Europe, and Asia. For more information, visit www.google.com.ph.

Although the apps will be available and priced in US$ dollars, Filipinos and other Android users outside the US will be able to purchase apps because Google Checkout supports local Visa and Mastercard credit cards.

Since I got my Nook Color and turned it into a full blown Android Tablet, I’ve been purchasing quite a few apps from the Android Market myself. I’m glad to know that my kababayans (fellow Filipinos) and other Android users will also be enjoying this privilege soon.

Any Android users here coming from the Philippines or from the other 99 new countries supported by the Android Market? Now that paid apps are now supported in your country, which apps will you be purchasing? Please share your thoughts.