PinoyMoneyTalk released its list of the Philippine’s Top Blogs of 2008 as an update to its regular feature, a list that displays the top blogs from the Philippines or blogs ran by Filipinos according to their Alexa rank. 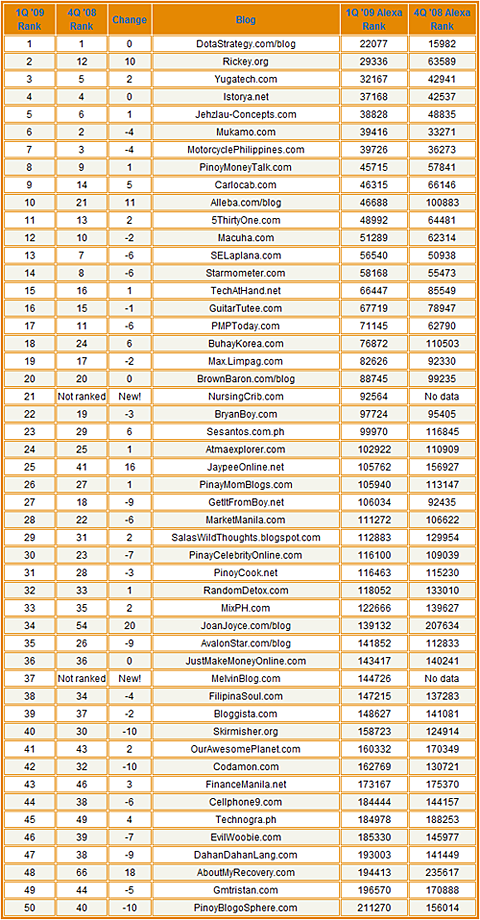 In the last update, the Philippines’ Top 50 Blogs in the 4th Quarter of 2008, JaypeeOnline was ranked at #41. I’m glad to find out that for the 1st quarter of 2009 update, JaypeeOnline is now ranked at #25 and is also one of the top 5 biggest gainers in this update with an increase of 32.6% from the previous update.

Early last year, JaypeeOnline was already in Alexa’s top 100,000 but due to some circumstances, I neglected my blog and wasn’t able to do post updates and publish articles so my Alexa rank declined drastically. In the 3rd or 4th quarter of last year, I started working again, found new ways of getting traffic (which is the key in getting a good Alexa rank) and slowly but surely moved my way back up again.

Thanks to James of PinoyMoneyTalk for coming up with this feature and regularly updating it. I’m sure gathering all the data and compiling it into a list is a very time-consuming and meticulous task. I’d also like to take this time to thank you my regular readers and visitors for your time and continued support of JaypeeOnline.

For those of you who didn’t make it to the list, don’t fret. I know how it feels because I was there before myself. Instead of getting discouraged and thinking about quitting, take this as a challenge and inspiration to do better and work hard so that your blog would be included in the next update.

Btw, there’s one Pinoy blog that isn’t in the list which easily makes it into the top 20 – TheWeblogZone by Rocky. I already informed James about it and I expect to see Rocky’s blog in the next update.

Do you know of any other blogs from the Philippines or blogs ran by Filipinos that should be included in the list or in the next update?

HowTo: 10 Ways To Bring Sexy Back To Your Blog